America’s labor unions are the unsung heroes in making workplaces and jobsites much safer than they were for much of the 20th Century.  These men and women stood strong against greedy corporations that showed little regard for the health and safety of their employees.

That is particularly true in the fight to rid the American workplace of asbestos.  If not for the resiliency and courage of labor unions and their members, asbestos exposure likely would be responsible for much more illness, many more deaths and far more grief. 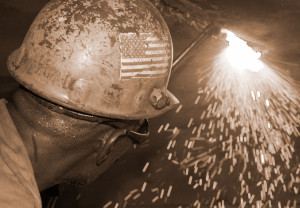 The Keahey Law Firm has been a longtime supporter and advocate for unions and support union members.  In fact, the firm’s founder and lead attorney, Pat Keahey, was honored to receive the prestigious “Friend of Labor” award in 2012 for his many years of union support.  (see video below)

“I have long enjoyed a close relationship with labor unions in Alabama,” Keahey said.  “Union members are some of the finest people I have ever known.  They are hardworking people who in many ways have been the backbone of the nation’s economy.  It has been a personal joy for me to know them, to support them and to represent them.”

When it became apparent in the first half of the 20th century that exposure to asbestos was literally killing workers, unions stepped into action.  It was not easy.  The corporations that made asbestos pocketed billions of dollars in profits and had no desire to stop manufacturing a product that created wealth for their shareholders and themselves.

By 1980, asbestos had been removed from tens of thousands of workplaces and the product was no longer used.  Unfortunately, the fight shifted from union members battling corporate greed to union members fighting for their lives.

Because asbestos-related diseases like mesothelioma are not diagnosed until many years and even decades after exposure to asbestos, American workers are still dealing with the effects of asbestos.  In fact, it is common for an asbestos victim to be diagnosed with mesothelioma, lung cancer or asbestosis even 40 years after exposure.

The Keahey Law Firm salutes America’s labor unions, their leaders and their members.  Our nation’s workplaces are much cleaner and safer because of your tireless work and courageous efforts.